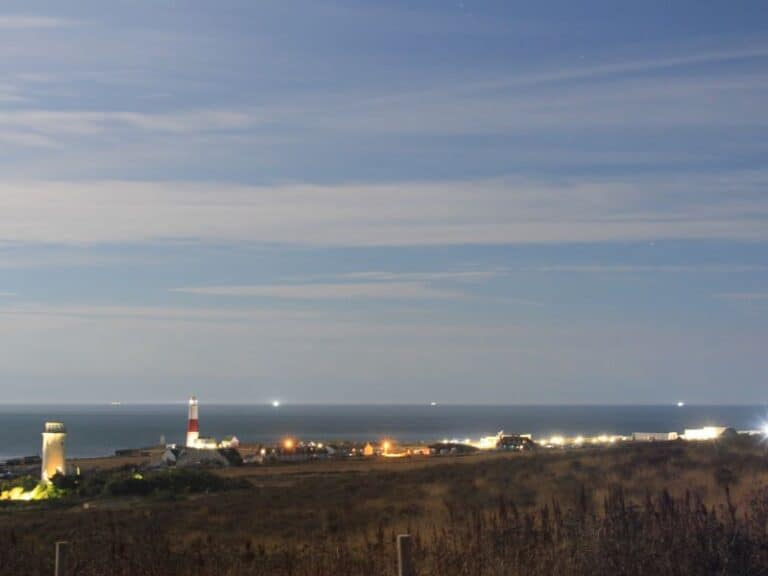 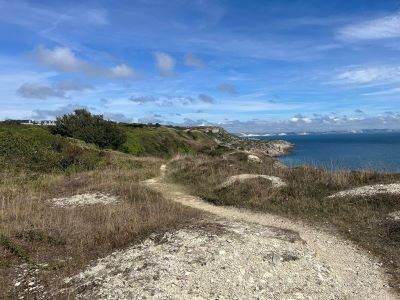 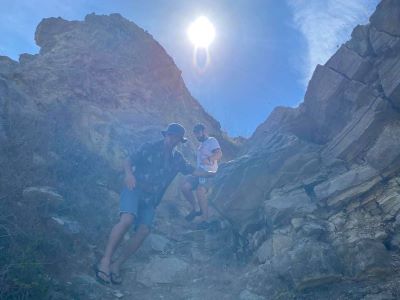 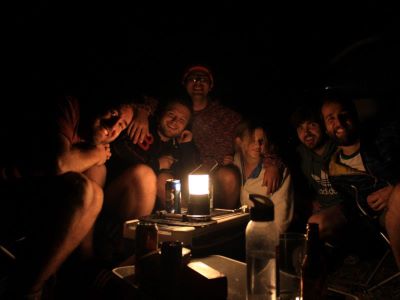 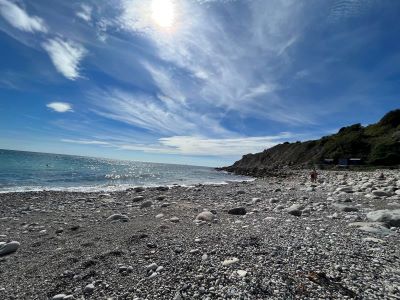 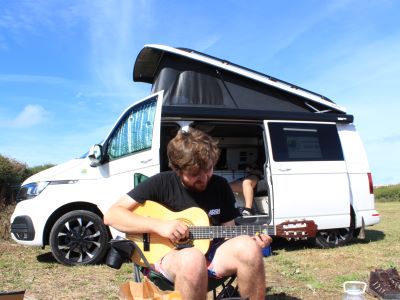 Earlier this year we went camping in Portland in one of our campervans. The Isle of Portland is famous for its beautiful light-coloured stone and its breathtaking coastline.  You will find Portland stone all over the country and even in parts of Europe. The stone was used to rebuild London after the great fire, and erect war memorials all over the world. It was even used in St Pauls’s Cathedral and Buckingham Palace!

However, calling it an island is a bit of a misnomer as it’s actually a Tide Island meaning it’s connected to the UK by a thin strip of sandy land (a Spit), called Chesil beach. With a road through the middle, driving the campervan along it you get beach views on both sides which is a nice way to start the holiday!

Just south of Weymouth the island is home to just over 13,000 people and has some of the most stunning coastal views I have ever seen. We didn’t go camping in Portland for the stone, although the industry is still very much alive and well! Instead, we went for an off-grid adventure on the south of the Island.

When did you go Camping

We went camping in Portland in early September to catch the last of the summer’s warmth and had sunshine all weekend. However, it was still just a tad too breezy to put the awning out, though we did try!

Description of my trip

Our plan for the weekend was a friend’s trip to go camping in Portland, which we had been talking about for a while. We hadn’t been away together for ages, so a camping trip felt both necessary and fun. We were drawn to the dramatic scenery of Portland by google images of the cliff faces and beaches.  But the idea of camping on an island played a part in its appeal to us!

The scenery did not disappoint as we had a beautiful view of the ocean and the lighthouse from our campervan. Our trip involved a campervan that slept 4, a tent that slept 6 and two Bivvy bags! So, between us we had most options covered! Although I won’t complain about having a comfortable campervan all to myself!

One of the attractions of camping in Portland and this part of the world is the South West Coastal Path.  Church Ope Cove was just around the corner from us and has a deep blue beach on the southeast of the island. Our campsite in Portland had easy access to the South West Coast Path. The cove was definitely the highlight of my time there. The blue ocean wasn’t too cold for a swim and the surrounding cliffs gave a feel of seclusion around the small cove.

The Cove is overlooked by the ruins of an old Church enriching the stunning views with the historical aspect of the luscious green cliff face. And the rocky outcrops give you great little adventures when you’re not in the water.

As we finished on the beach we walked up the steps towards the church and onto Pennsylvania road. The sun was bright that day so the old buildings and fields all looked stunning and the walk through the coastal roads and quarries was beautiful.

We stopped off at a small café called Hayloft Café and Bar for toasted sandwiches and baguettes! Even my awkward request for a vegan option got me a vegan cheese one, which I have to say I did not expect as it wasn’t on the menu. So a big win for The Hayloft Café in my eyes!

On our way back we headed to the Eight Kings for a pint which perfectly capped off the trip. The pub had friendly staff but a couple of even friendlier locals. It was one of those moments I love on holiday, meeting new people and sharing stories about places to go and things you have seen!

At the most Southern point of Dorset, you’ll find the iconic red and white lighthouse of Portland Bill. This Icon of the most southern point of the Jurassic coast is the third generation of a line of Lighthouses protecting ships throughout the years from the shallow rocky waters of the Dorset Shores.

It’s also home to Pulpit Rock just around the corner which is a precariously balanced boulder against a rocky cliff, the result of quarrying in the late 19th Century. This lead to a stunning sight and a must-see for any tourist visiting the south of the island.

The Campsite in Portland

We camped at Sweet Hill Farm Wild Camping, which was great for us.  There is a pebbly beach near the bottom of the island which is a short walk from the campsite. The campsite is quite basic, but you can pick your own spot to set up. There are a few benches set up around the field for you to use, which was perfect for sitting around. The only thing to be aware of is the policy on fires.  When we stayed at the end of the summer there was a fire pit ban due to the drought.

There were also cold showers and toilet facilities however these were clean but basic! Portland is a bit off the traditional tourist track and the campsite is basic. But this makes it an ideal spot for your first off-grid adventure.